Sergey Kovalev put on a masterful display to outclass Bernard Hopkins and unify the light heavyweight division after a unanimous points decision at Atlantic City at Broadwalk Hall.

Hopkins, who has given himself the moniker ‘The Alien’ for the longevity of his career had two of his greatest career victories at the New Jersey venue – beating Kelly Pavlik in 2008 and his first light heavyweight championship victory against Antonio Tarver in 2006. 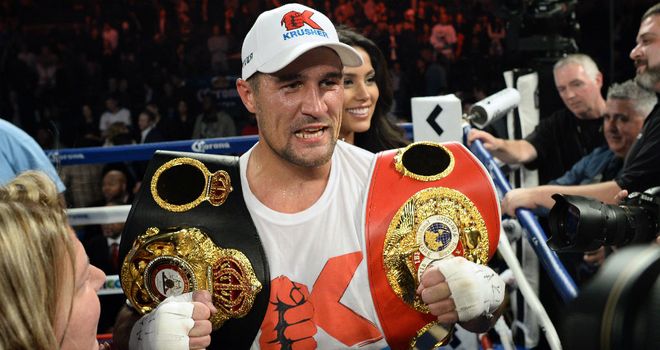 However, on Saturday night he was outclassed by 31-year-old Kovalev, who had not been past the eighth round in his professional career.

“I give him a lot of respect,” said Hopkins post-fight. “We both would fight anyone and that’s how we ended up here tonight. That’s what brought us together. That’s what the people want to see, one title, one belt, one champion.

“He had a really good game plan.

“When he got hit with some of my shots he would step back. But he used his reach and his distance and that was the key to his victory. He has very good mechanics and patience. It was smart that he stayed patient. He had a really good game plan. I will give him that.

“Every time I tried to engage he would step back and counter over my jab.”

Kovalev spoke highly of Hopkins, but feels the time is now right for the veteran to hang up his gloves.

“He was a really tough opponent,” he said. “He is very good at keeping distance. I really respect him for the fight but he needs to stop his career, I think, because he’s already done a lot in the boxing world and he needs to give an opportunity to younger fighters to be champions. I’m next.

“I needed to keep control for the whole fight. I wanted to show to my fans and boxing fans how I can box. I think I did it.”