The sport’s 214 federations cast their votes in Beijing to decide who should lead the sport, which is dealing with the fall-out from a series of doping allegations.

The UK’s Lord Coe succeeds Senegalese Lamine Diack, 82, who has led the IAAF for 16 years.

The other contender was Ukrainian Olympic pole vaulter Sergey Bubka.

Lord Coe’s initial term will be for four years.

He won 115 votes from the voting members that make up the International Association of Athletics Federations, with Bubka receiving 92.

The two-time 1500m Olympic gold medallist praised the organisation for how the contest was conducted, saying it was “fought according to sound judgement throughout”.

He said his win was the “second biggest and [most] momentous occasion of my life” after the birth of his children.

“Delighted and humbled by the confidence shown in me by the IAAF family – thank you, now the hard work begins,” he tweeted  shortly after the result. 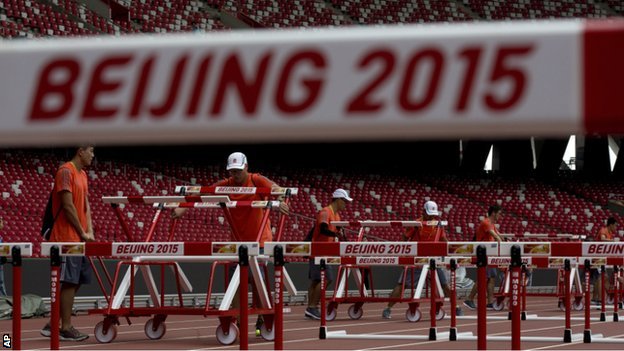 Both Coe, 58, and Bubka, 51, who won Olympic pole vault gold in 1988, had pledged to reform athletics in their manifestos.

They both said they wanted the sport to appeal to a wider audience and attract younger people.

However, the anti-doping agenda began to dominate the election following a series of harmful allegations.

Lord Coe proposed the creation of an independent panel to address the issue, while Bubka wanted a “very deep study” to look at introducing tougher sanctions for cheats.

Last year, the IAAF launched an investigation into claims that 99% of Russian athletes were doping .

Then earlier this month, The Sunday Times and German broadcaster ARD/WDR alleged an “extraordinary extent of cheating” by athletes after they obtained blood test data from 5,000 athletes between 2001 and 2012.

And the IAAF was accused of blocking a study which indicated a third of top athletes admitted cheating. The governing body later denied obstructing it.

Lord Coe has claimed the reports alleging widespread doping were a“declaration of war” on his sport.

The election was held just three days before the 2015 World Championships get under way in Beijing.