Liverpool boss Jurgen Klopp endured a frustrating first game at Anfield as the Reds were held to a draw by 10-man Rubin Kazan in the Europa League.

The visitors took the lead through Marko Devic’s stunning half-volley but had captain Oleg Kuzmin sent off for a second yellow card soon after.

Liverpool responded as Emre Can stabbed in following a free-kick.

Substitute Christian Beneteke hit the post late on as Liverpool were held to a third successive Group B draw.

Despite pressing late on, it was ultimately a difficult evening for Klopp and Liverpool as they struggled to break down their opponents for large periods of the match.

The result leaves Liverpool second in their group on three points, four behind leaders FC Sion.

King of the Kop, but work to do

The arrival of Klopp has been greeted with excitement by Liverpool fans since he was confirmed as successor to Brendan Rodgers.

The 48-year-old’s first appearance in a Liverpool dugout was at Tottenham last weekend but Thursday marked his first competitive appearance at Anfield.

In his programme notes,  Klopp praised the “special atmosphere” the fans created, and they certainly extended a warm welcome for the German.

Stall traders sold scarves outside the ground boasting “the Klopp revolution”, while fans waited eagerly for autographs and a photo with their new manager.

It was not only the fans who were keen to witness Klopp’s first game in charge, with the club’s owners having flown in for the game.

Klopp’s appearance from the tunnel just before kick-off was met with rapturous applause, but any excitement about a new era gave way to frustration as Liverpool’s familiar failings this season were once again on show.

Thousands of Liverpool fans made their way to Anfield for the Europa League tie to greet their new manager (Image credit: Reuters)

Klopp took charge of Liverpool on 8 October, with his first game in charge a goalless draw at Tottenham last weekend (Image credit: Reuters)

Klopp appeared to have bought a new coat to mark his first game in charge of Liverpool (Image credit: Getty Images)

Any signs of encouragement?

Under Klopp, Dortmund reached the Champions League final in 2012-13 and climbed from 110th to 13th in the Uefa rankings.

Liverpool fans will hope he can have a similar impact at the Reds. They are currently ranked 54th in Europe, sandwiched between FC Genk and APOEL.

Europa League success is perhaps not the supporters’ priority, but they will welcome improved displays in the competition after disappointing draws against Bordeaux and FC Sion this season.

Liverpool’s early endeavour against Rubin Kazan was encouraging as they played quick, one-touch football and attacked at pace.

However, when Rubin took the lead, albeit against the run of play, Liverpool – along with the home fans’ enthusiasm – faded.

Kuzmin’s sending-off – he was shown a second yellow card for stopping Can – and Can’s subsequent equaliser lifted Anfield again.

Liverpool, though, failed to build on that.

Despite a late flurry as Rubin Kazan’s players retreated further into their own half to protect the point, the hosts lacked the creativity to score a winner. 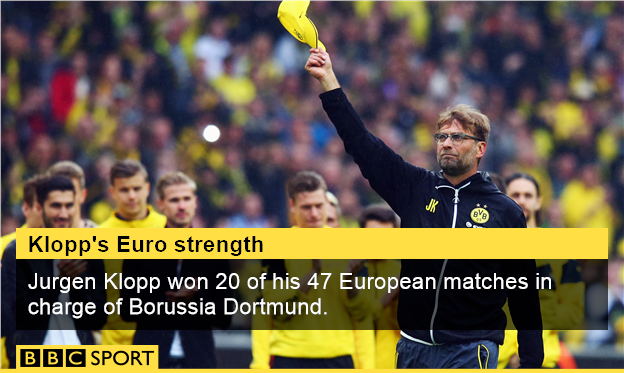 Man of the match: Emre Can

Not many players shone for Liverpool, Emre Can’s run led to Oleg Kuzmin’s sending-off before he scored the first goal of the Jurgen Klopp era (Image credit: AP)

Klopp felt Liverpool had their moments, but accepted the sending off made it more difficult for his side.

“It was a very interesting game, a big challenge because of the quality of Rubin,” he said.

“Sometimes it is a big advantage against 10 men, most of the time they stop playing football and defend in a compact block.

“It was not a masterclass but it was not the worst day in my life.”

Klopp was appreciative of the reception the Liverpool fans gave him, adding: “It was one of the best moments for me.

“I felt everything positive and then I concentrated on the game.”

What next for Liverpool?

It is another home game for Klopp as Liverpool entertain Southampton on Sunday. Their next Europa League game is at Rubin Kazan on 5 November.

The stats you need to know