Paul Dummett’s late strike rescued a point for Newcastle as Manchester United missed the chance to go level on points with fourth-placed Tottenham.

It was a remarkable end to a game that had seen the away side lead twice.

Wayne Rooney’s penalty and Jesse Lingard’s finish put them 2-0 up before Georginio Wijnaldum and Aleksandar Mitrovic’s penalty levelled the scores.

Rooney’s second looked to have won it for Louis van Gaal’s side but Dummett salvaged the draw in the last minute.

The point earned is not enough to lift Newcastle out of the bottom three – they remain a point and place behind 17th-placed Swansea – but it represents another notable improvement following three successive 1-0 league defeats.

For Louis van Gaal’s side, it will represent two points lost and a step backwards after back-to-back Premier League and FA Cup victories had offered improvement on a winless December.

Let us entertain you

Following criticism of Manchester United’s attacking prowess, in a season that had seen them score just 24 goals in 20 league games prior to Tuesday, Van Gaal himself admitted on Monday that he has been “very bored” at times watching his side.

He can have no such complaints after this hugely entertaining, see-saw game, which produced some of their best attacking play of the season.

The England striker gave them the lead from the spot after Mike Dean’s controversial call to award a penalty against Chancel Mbemba after his arm blocked Marouane Fellaini’s back-post header from a corner.

But it was his role in setting up Lingard for the second – holding the ball up before rolling a perfectly timed pass into the winger’s path for a low, angled finish – and his superbly struck 20-yard second, after Memphis Depay’s shot had deflected to him, that really showcased the 30-year-old’s talent, the latter of which drew a rare smile from his manager.

However, United’s attacking display was let down by key misses from Lingard, who blazed over from inside the box at 2-1, and Fellaini, who headed straight at Rob Elliott from point-blank range when his side led 3-2.

Ultimately, though, Van Gaal will be left bemoaning an area in which his side have largely excelled this season, as a series of defensive lapses cost them victory. 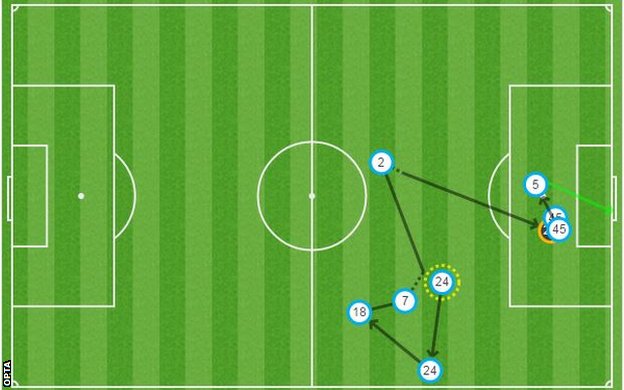 Georginio Wijnaldum scored his eighth goal of the season (all of which have come at St James’ Park), finishing with a shinned shot following Aleksandar Mitrovic’s downward header (Image credit: OPTA)

Newcastle have been one of the early movers in this transfer window, signing midfielders Henri Saivet and Jonjo Shelvey, both of whom greeted the crowd before kick-off.

But on the evidence of this display, at least, the current squad is not lacking in fight.

At 2-0 down they refused to crumble, hitting back soon after Lingard’s goal as Wijnaldum – who had earlier seen a 12-yard shot saved by David de Gea – made no mistake from a similar range after latching on to Mitrovic’s downward header.

The supplier turned scorer after the break to make it 2-2, dusting himself off after being grappled to the ground by Chris Smalling in the box to roll in his fourth goal of the season from the penalty spot.

Even when they fell behind again with 11 minutes to go, Newcastle dug deep and were rewarded when the away side failed to properly clear a ball into the box and Dummett’s fierce strike from the edge of the box found the net via Smalling’s chest.

“What a fantastic match. Credit to both sets of players and managers as they both wanted to win and gambled to win. I think a draw was a fair result.

“How on earth can you work football out?

“Newcastle got some confidence and they shoved themselves 10 yards up the pitch, particularly in the first half. They got the goal just before half-time and I’m sure Steve McClaren told them to do the same as they had in the last 10 minutes of the first half.

“It was a great atmosphere in the stadium and I just wanted more.

“The one concern is that we have seen Newcastle performances like this against Tottenham and Liverpool but what they have to do now is go into games against lesser teams and produce that kind of performance.”

Man of the match – Wayne Rooney

Wayne Rooney was at the centre of an improved attacking display from Manchester United, scoring two of their goals and assisting the other (Image credit: EPA)

ewcastle United boss Steve McClaren:“The crowd responded magnificently and we wanted to show everyone what we are about.

“People said that United were boring and that we lack character – but we kept fighting until the end and we have got a goal that feels like a winner.

“People thought it would be a 0-0 and it was a classic at 3-3. It must have been a great game for the neutral – it was a heart attack for the coaches.”

“We have given it away – I have told that to my players. When the referee gives a penalty for nothing – it is a duel I think and you cannot decide who is worse – but we gave it away.

“We could have scored six goals easily here and we did not. If we had, it would have been three successive wins at the start of the year going into Liverpool.”

The stats you need to know

Newcastle are at home again on Saturday, with West Ham the visitors to St James’ Park.

Manchester United travel to Anfield to face Liverpool on Sunday in a 14:05 GMT kick-off.